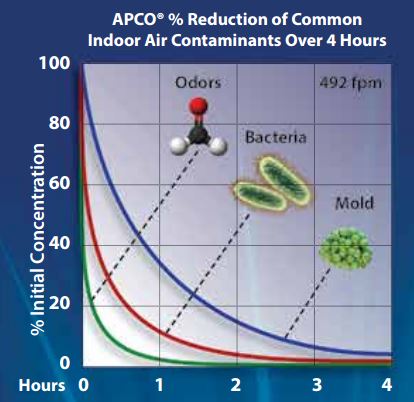 Laboratory studies show that after just a few hours of operation, APCO significantly reduces the most common forms of indoor air pollution, and within 24 hours of use, APCO kills 99% of airborne mold, bacteria, viruses and allergens.

At the heart of APCO is a matrix of activated carbon cells. These cells attract and hold odors and microbes and other contaminants which are then catalyzed by exposure to UVC light, leaving only harmless water vapor and CO2 which are released back into the air. The process leaves the carbon cells clean so they never fill up or need to be repalced, and unlike other air purifiers, NO ozone is produced. APCO is 100% ozone free.